​What Is Rugby Union ?
Rugby union, widely known simply as rugby, is a contact sport that originated in England the first half of the 19th century. It is based on running with the ball in hand. In its most common form, a game is played between two teams of 15 players each, using an oval shaped ball on a rectangular field called a pitch. The field has H-shaped goalposts at both ends.
Rugby union is a popular sport around the world, played by male and female players of all ages. Statistically it is the second most played sport globally (behind soccer).
Rugby Union has less serious injuries than rugby league or AFL football in Australia annually.

​Aim of the Game
The game is 90 mins long divided into two 40 minute halves with a 10 min. half time.  The goal is for your team to carry the ball down field and, with ball in hand, touch the ball down over the goal or try line anywhere behind the goal posts. The opposing team is allowed to tackle the ball carrier (only) anywhere below the ball carriers shoulders. Any player tackling above the shoulder is penalised. If a try is scored the scoring team is awarded 5 points, they can add an additional 2 points if they can then kick the ball through the goal posts above the cross bar (a conversion). A team can also score 3 points by kicking a field goal, again through the goal posts above the cross bar,  during play. 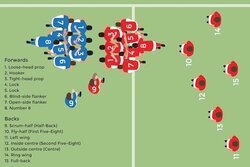 The team consists of 15 players on the field with up to 8 substitutes (known as the bench). Teams are divided into Fords (No's 1-8) and Backs (No's 9-15). The Fords are the muscle and tend to be the powerhouse that takes and makes the bulk of tackles, pushes the ball forward and set up a secure position for the backs to score. The backs tend to be faster, setting up for the quick break and score the majority of tries.  There is a place for every body type on a rugby team. from short and stocky to lean and fast, we have a position for them.  Each position has a defined role within the team. 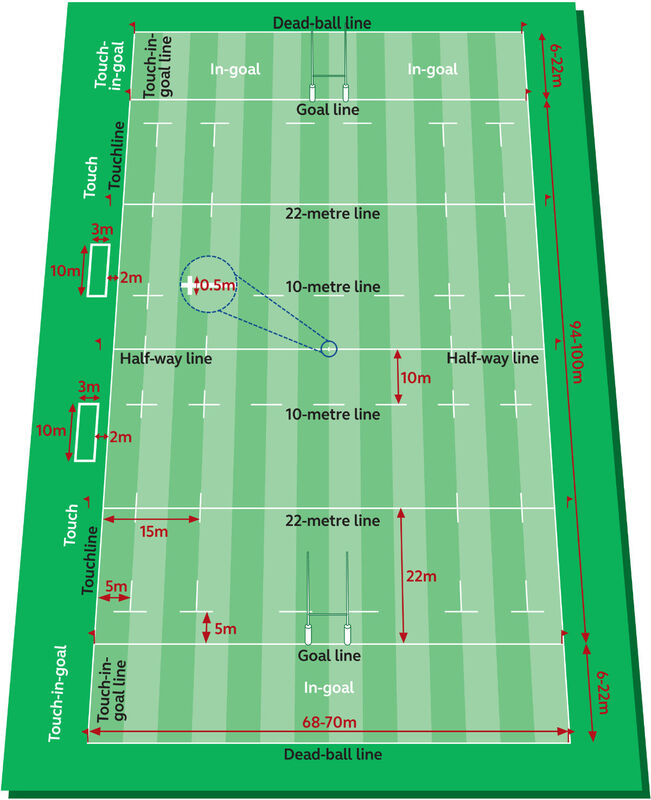 Rugby is played on a rectangular field, between 94m to 100m long and 69m to 70mm wide.  The field is broken down into several play zones defined by the 10m & 22m lines and a dead-ball line (behind the goal posts).